World-renowned violinists and educators Daniel Ching and Sandy Yamamoto visit Key to Change to work with students on their violin repertoire. This event takes place at Luther’s Table in Renton on Saturday, September 21 at 10am. 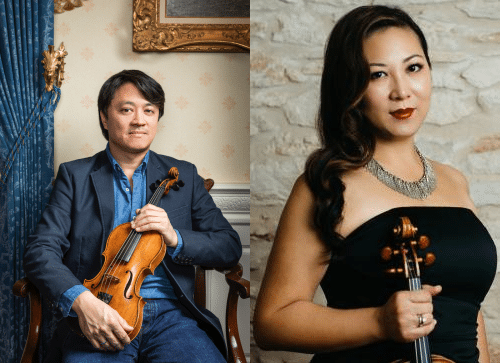 Daniel Ching, a founding member of the Miró Quartet, grew up in San Francisco and began playing the violin under the guidance of his father at age 3. At age 5, he entered the San Francisco Conservatory Preparatory Division on a full 12-year scholarship, where he studied violin with Serban Rusu and Zaven Melikian and chamber music with Susan Bates.

He holds his M.M. from the Cleveland Institute of Music, where he studied with former Cleveland Quartet violinist Donald Weilerstein. He also studied recording engineering and production with Thomas Knab of Telarc, and subsequently engineered the Miró Quartet’s first promotional disc. Daniel serves as Associate Professor of Practice (Violin) at the University of Texas at Austin.

Sandy Yamamoto has dazzled audiences in concert performances around the globe for the past three decades as a soloist and as a member of the Miró Quartet. She began her violin studies at the age of 4. At 11, she made her solo debut with the North Carolina Symphony and has since appeared with orchestras throughout the US and Europe to critical acclaim.

Since leaving the Quartet in May 2011, she has been appointed Associate Professor of Practice (Violin) at the Butler School of Music at the University of Texas at Austin. She also founded the Butler Trio with Miró Quartet cellist, Joshua Gindele and pianist, Colette Valentine.  She has since been enjoying a versatile performing career, playing concertos and recitals as well as leading noted chamber orchestras throughout the United States.

Your ticket for the: Daniel Ching and Sandy Yamamoto Master Class